Why do most sales projections fail?

One common perception is if most sales projections fail, why do it? As you probably know, sales forecasts are used to predict a certain amount of revenue over a given period of time. Whether this is based on a gut feeling or on historical data, the worst thing you can do is over-promise and/or under-deliver.

Why Do Most Sales Projections Fail?

Projecting revenue is essential. Two weeks ago in our blog, How does a CFO add value?, I mentioned the three legged stool analogy. If your sales fall short of projections, you’re going to run into some issues with respect to cash flow, inventory, or a lack of resources. Whether you are releasing a new product or are continuing to project growth in your sales, it’s imperative that your sales projections are accurate.

Sales managers and CFOs normally have different perspectives, mainly because their roles contrast greatly. The sales manager is often more concerned about his or her team and maintaining customer relationships. They’re also generally fairly optimistic (sometimes overly so) in their projections.
The CFO looks at the bigger picture. They move 3-5 months faster than sales people or accountants, because they’re forward-thinking and continuously making plans on how to improve the company as a whole. This often leads to conflicting predictions with the sales force.
For example, Bill (the CEO of ABC Company) asks Steve (the CFO of ABC Company) what he projects sales to be in the next quarter. Based on previous performance, Steve predicts about $3.8 million, because last quarter they generated $3.7 million. That’s about 2% higher than the actual revenue generated, which is reasonable considering their historical record.
But then Steve the CFO asks Ben, the Sales Manager, what he thinks. Ben’s top salesperson, Lillian, performed over 40% better this quarter compared to the previous quarter, and he expects her to positively influence the sales team with her success over the next quarter. Ben optimistically projects $4 million, which is almost 8% higher than last quarter’s revenue, and 6% more than Steve’s projection.
When you increase revenue by just 2%, the bottom line also increases by a substantial amount. When comparing the bottom lines of a 2% increase in revenue versus an 8% increase in revenue, which would you think is more realistic? And which number would you accept as a CFO?
Let’s look at a more recent example.

Let’s refer to the Apple Watch situation last year… Apple optimistically projected to sell 41 million watches. Shortly after releasing the product, analysts altered that projection down to 31 million. Pretty soon, Apple decided to be a little more realistic in their projection. Thus, they reduced it yet another 10 million. Why do you think that is?

1. Their “gut” feeling was poisonous.

It’s natural for a company to be excited about the release of a new product.  They were absolutely ecstatic that this product was finally going to launch. This positivity created a bias for future projections because they were the only ones formulating this prediction, not an outside group of differing opinions.

2. The idea that a new product equals new data.

“We don’t need to check our historical figures because this product never existed in our company before, right?” Wrong. True, this is a new product. However, there are other ways of comparing and predicting your sales.
For example, if I was the CFO of Apple, and Apple Watch decided to launch a new app, I would look at similar, previous apps that cost the same for marketing, production, and other direct costs associated with the app. It’s common sense – how much can you usually afford to produce?

Apple quickly saw that their projections were wrong and just as quickly adapted. But companies that are worth $10-100 million can’t necessarily afford to be 20 million units off of their projections. A projection that wrong could have easily put a company without the resources of Apple into the grave.

How to Prevent Your Sales Projections from Failing

Nate Silver, author of  The Signal and The Noise (pg. 19-20), generally spoke to the failure of projections…
“The most calamitous failures of prediction usually have a lot in common. We focus on those signals that tell a story about the world as we would like it to be, not how it really is. [Then] we ignore the risks that are hardest to measure, even when they pose the greatest threats to our well-being. [Thus] we make approximations and assumptions about the world that are much cruder than we realize. We abhor uncertainty, even when it is an irreducible part of the problem we are trying to solve. If we want to get at the heart of the financial crisis, [then] we should begin by identifying the greatest predictive failure of all, a prediction that committed all these mistakes.”
Although Silver is analyzing financial crises, the same analysis applies when we look at sales projections of a mid-size business. The most important factors you have to calculate are risk and uncertainty. If you neglect to consider risk and uncertainty, you are most likely over-shooting your projections.

For uncertainty, identify those events or situations that you are not sure of. Acknowledging your ignorance is key in this situation. It allows you to put focus on places where you are not sure. Uncertainty is not the same thing as inaction as many business or financial leaders like to define it. That’s an important distinction that you must continue to remind yourself of when analyzing what risks and uncertainties your company is facing.
By completing a SWOT analysis, you’ll be better equipped to understand where risk and uncertainty is found within your company.

If the problem is either over-shooting or under-delivering sales in their projections, then the answer is relatively simple but is often overlooked. The Goldilocks Sales Method will help you project revenue that is not only more accurate, but will help you utilize your projections. 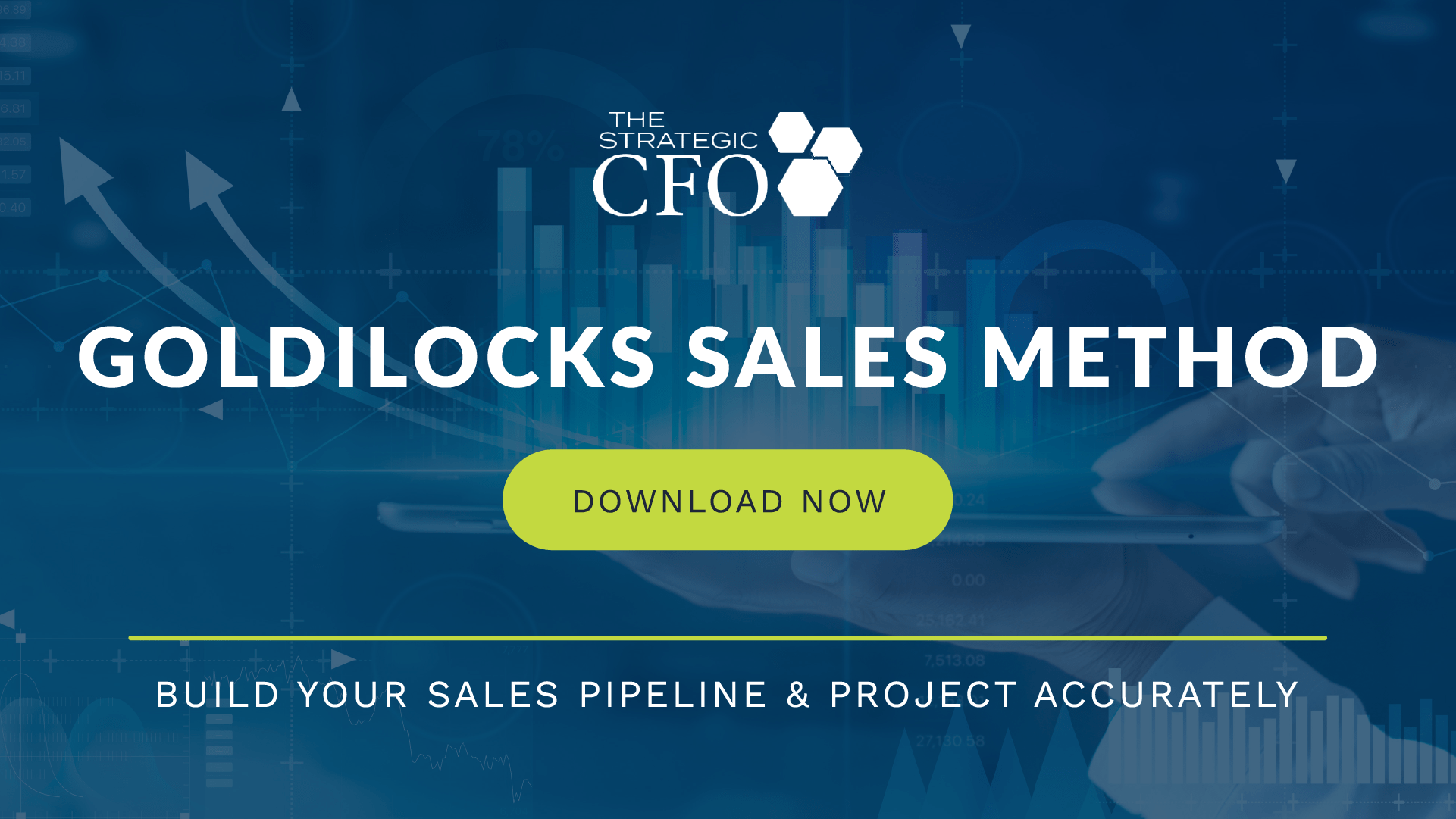