See Also:
How to Evaluate IT Systems
How to Choose a Software Dealer
Technology Strategy for Small to Medium Sized Companies
How to Ensure Redundant Data Communications Links
How do You Know When it is Time to Buy New Software

Modern system recovery processes are complete solutions. It is designed to reduce any server down time with the use of a specialized back up and virtual server appliance. In addition, it creates real-time backups as frequent as every 15 minutes. System recovery also offers offsite storage at an affordable cost. It provides a low cost, speedy disaster recovery process.
In addition, data is encrypted. It is not accessible to anyone, either on the backup device or at the remote storage facility without a required passkey.
It also eliminates the need to assign a data custodian to change tapes as well as the cost and hassle of managing an on-site tape backup solution. Your IT department or resource monitors and manages the entire process.

A recent study discovered that, of companies experiencing a major loss of data, 43 percent never reopened, 51 percent closed within two years of the loss, and a mere 6 percent survived over the long-term.1 For small and medium-sized businesses, these statistics suggest the necessity of implementing a robust data backup and recovery solution. Loss of data could mean lost emails, accounting data loss, patient or client data loss, loss of legal records, lost orders, and so on. This document will discuss how a data backup and disaster recovery solution overcomes challenges that are commonly faced by small and medium businesses.

Magnetic tape and disks are the two leading media for data backup storage. While magnetic tape is currently dominant, analyst Dave Russell of Gartner believes that “Recovery will move to online disk-based storage in the future. This will cause a major shift in the backup market during the next four to five years.”2

Smaller companies in particular will benefit from the shift, as recent advances in design and manufacturing lower the total cost of disk-based storage in terms of storage per bit. Falling prices, combined with the various performance advantages that storage industry analysts cite, render disk increasingly attractive. Gartner Group highlights the suitability of disk for these organizations by explaining that, “The need for high-performance online recovery of data, combined with the availability of low-cost disk arrays, has influenced enterprises and small and midsize businesses to adopt a disk-based approach for backup and recovery.”3

Tape, in contrast to disk, is physically delicate and easily compromised by environmental factors such as heat, humidity, and magnetic interference. Moreover, you must replace tape cartridges frequently (every 6-12 months). Tape’s innate sensitivity contributes to high failure rates, with analysts estimating that anywhere from 42 to 71 percent of tape restores fail. Even when magnetic tape backups are successful, tapes themselves are subject to loss or theft, and may be in the possession of an employee or vendor unable to reach a recovery site. Thus, even when physical backup and restoration processes succeed, tape may not prove to be as timely and appropriate a medium for data storage as disk. Time is a crucial consideration because each hour of server, application, and network downtime endured until data restoration comes at a high cost, especially to smaller businesses.
Analyst Jon Oltsik of Enterprise Strategy Group also points out that tape is seldom encrypted. This compounds the destructive impact of tape theft:

“Very few people encrypt backup tapes, which means that they rely on the security of the backup and off-site rotation process.”4

Magnetic tape encryption, unlike disk encryption, has historically been too costly for all but large enterprises:

“Encryption of any data that is leaving the security of the data center, in transit, has always been an option, unfortunately, a very expensive option,” explains Clipper Group.5

Disk offers not only lower cost encryption but also other advantages. In contrast to tape, “disks are more durable, last longer, withstand more overwriting and you don’t need to clean any heads,” according to Rinku Tyagi of PCQuest. Additionally, “When it comes to backing up using disks, they are easier to manage. Disk backup systems include management tools, often browser-based, for you to easily configure settings and check status from anywhere.”6
HP enumerates other advantages of disk storage, noting that “Data is backed up to disk much faster than tape, which translates to less impact on production server availability. Disk is also a more reliable media than tape and less prone to error, which translates to less failed recoveries.”7 Clipper Group believes that the superior speed of disk storage is an enduring advantage: “High performance disk will always be the choice for online applications that require fast access.”8
While disk offers advantages over tape, it is not a panacea. After installing disk technology, companies will still be responsible for monitoring and managing backup processes, encrypting and safeguarding backed up onsite and offsite data, restoring data to new hardware, and other functions. Without implementing a layer of governance over disk-based data backup, these companies court the danger of failed backups and delayed restoration of data, thereby jeopardizing their chances of successful recovery from major data loss.
Smaller companies unable or unwilling to invest in the human expertise and infrastructure support systems necessary for management of their backup system can leverage a data backup and recovery solution to remove staffing burdens.
TOTAL BACKUPS SOLUTIONS NOW AVAILABLE TO THE SMB

“Incremental Forever” methodology captures all changes to the initial image in increments of as often as 15 minutes. The Incremental Forever technology not only backs up recent data sets but also allows end users to reconstruct the state of their data as it stood at the end of various restoration points over the last two days, various days over the last two weeks, various weeks over the last month, or various months since the implementation of the latest in backup technology. This level of forensic and auditable data recovery may satisfy various regulatory requirements (such as HIPAA and GLBA) for data retention and data record reconstruction, and also serves stakeholders such as supply chain planners, warehouse analysts, auditors, and legal counsel.

This technology generates an image of all hard drive partitions via an agent. It is then warehoused on the backup device physically located at your location. The data is stored AES-256 bit encrypted and compressed, reaching efficiencies as high as 2:1. We recommend a block-level, not file-level, backup. This means it captures data at the level of 1s and 0s. Block level data is raw data which does not have a file structure imposed on it. Database applications such as Microsoft SQL Server and Microsoft Exchange Server transfer data in blocks. Block transfer is the most efficient way to write to disk and is much less prone to errors such as those that result from file-level backups. Additionally, open files or open databases do not affect block level backups. The block-level image is an exact digital duplicate of the on-site server.

A good backup system should allow for quick and flexible restores. Today’s solutions allow for recovery of files, folders, partitions, mailboxes/messages, databases/tables using a quick and intuitive process. In case of a complete server failure, this new technology allows for a bare metal restore to new hardware which has a different configuration, hardware and drivers as compared to the failed server. Incremental based backup allows restores from several points in time. This allows a company to restore multiple versions of files, folders, messages/mailboxes, and database/tables.

After imaging the servers to which it is attached, the backup device then creates an independent 256-bit encrypted tunnel. It then transmits the imaged data to two secure offsite locations. It resides in an encrypted, compressed format creating a total of three copies of the data in three geographically distinct regions. Since the data is encrypted and only we have the key, no one has access at any of the remote storage facilities.
Transmitting data to remote sites guarantees that the data is safe in uncompromisable locations. These remote sites are in case of physical damage to the client’s network/backup device or even a regional disaster. Encryption is an important step in the process of transmitting data between the backup device and the remote sites. This is because it greatly reduces the risk of data loss incidents that plague magnetic tape. In addition, it prevents man-in-the-middle attacks during transmission. No one has ever broken the 256-bit Advanced Encryption Standard (AES) algorithm. Furthermore, it is currently considered the gold standard of encryption techniques and renders transmitted data immune to theft.

If any of your servers fail, then the server virtualization technology embedded in the backup device allows servers and applications to be restored and rebooted within a couple of hours. You may sometimes endure a wait of several days in order to receive replacement servers from vendors. However, your backup device can have your business up and running while waiting on a replacement server. The backup device multitasks; even while functioning as a virtual server, it can continue to back up data from other devices plugged into the device. The technology thus allows you to remain in business without any significant loss of data backup, server functionality, or application downtime.

Transmission itself occurs over your Internet connection. You can easily configure it to minimize bandwidth consumption. Today’s device leverages Adaptive Bandwidth Throttling, which only utilizes unused bandwidth or allows us to set an outbound limit. The UDP based smart transfer technology utilizes a host of innovative algorithms to speed up data transport and resume from failure. The device can therefore exercise file control over the data imaging and transmission processes.

You can monitor the device by the Network Operations Center 24x7x365. Failed processes generate immediate alerts to engineers, who often remotely correct errors after receiving notification. In case of more serious backup issues, the Network Operations Center will conduct repairs at your site. If any backup units are irreparably damaged or destroyed, then they will ship replacements directly to your location. These replacements are pre-loaded with all stored data.

These devices today are extremely affordable, and are available with offsite storage for as little as $1.50 per GB. 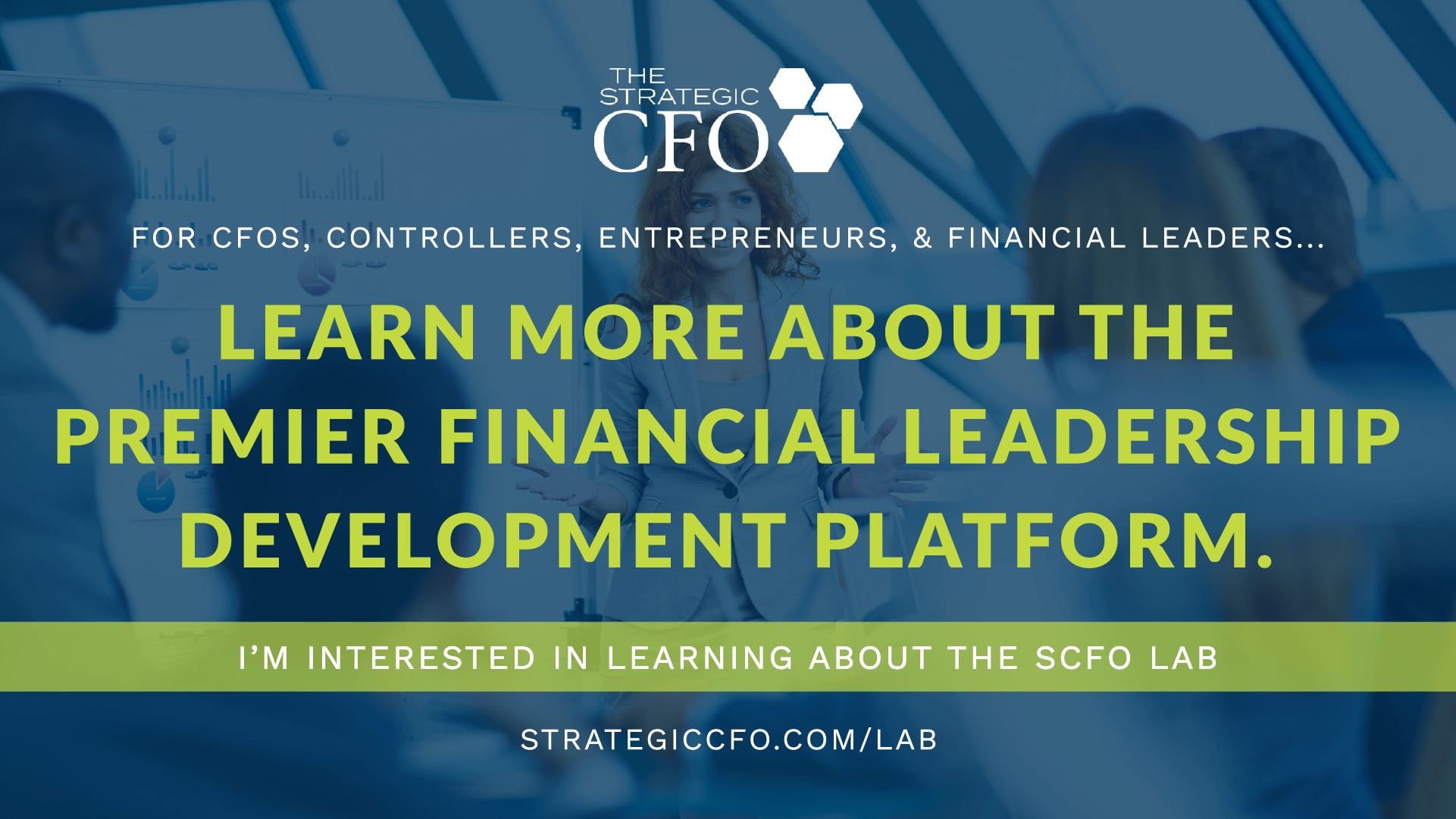 How to Lead an ERP/Accounting System Implementation

How to Make Dramatic Changes in Business

Recently, we had a coaching participant mention to us how her company was wanting to make a huge change in their business that would ultimately destroy the current business. This happens more often that you would think… The owner or founder of the company wants to make a shift, a change, but the leadership did not

Financial Leadership in the Digital Age

There is more information available today than in another other age before. It’s overwhelming. Instead of having verbal conversations with one another, there is a room of people on their phones or laptops communicating with other people around the world. We are processing thousands (if not millions) of pieces of information a day. And that’s