Brexit: Why should you care?

Britain’s exit from the EU, commonly nicknamed Brexit, is one of the most discussed issues over the past week; particularly when it comes to the financial implications of Brexit and how it impacts business. 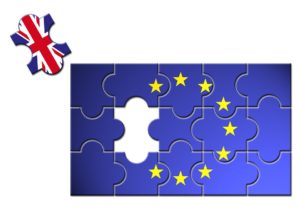 For the first time in its existence, the European Union (EU) has lost a country from its (previously) 28-country politico-economic union.  News reports have been answering the most Googled questions: What does Brexit mean? What is the EU? Should Great Britain leave the EU?
Truth is, there are dozens of financial implications that businesses are going to have to contend with, regardless of whether they are based in the US or other countries. With Britain as the 5th largest economy in the world, it is bound to have a direct impact on the United States. The US currently has the largest economy in the world. Because it can be slightly overwhelming to understand what Brexit means for business (with the term “Brexit” returning over 213 million Google search results and counting), we’ve narrowed it down to 4 macro issues.

We’ve chosen to examine these issues because, regardless of whether you’re a domestic firm or a multi-national corporation, they could have either a direct or indirect impact on your company.

It’s a no-brainer that you need people (labor) to run a business. With labor, comes skill. In a recent article, The Guardian analyzed what the financial implications of Brexit are and, more specifically, how the talent pool is anticipated to shrink in the coming months or even years. The United Kingdom (UK) is experiencing a skill gap in many professional positions, such as IT. GB has failed to produce skilled workers or laborers internally. Many of the roles that require these types of skill immigrants from other countries in the EU hold. The Guardian quoted Bhuwan Kaushik, CEO of Spectromax (an IT-based company), saying:
[quote]“The impact of the Brexit will be sizeable and long term. There’s a huge IT skills gap in the UK. It’s going to take a number of years to close it. Leaving the EU at a time when the UK is in need of skills will be a huge blow to UK businesses, let alone the commercial opportunities that may be lost and could consequently stunt UK startup growth.”[/quote]

So why does this matter?

Because labor matters regardless of what industry you’re in and what type of labor you require (skilled or unskilled labor). Even if you’re an American company who does not do business with other countries, it’s time to start digging a little deeper. Research the origins of your suppliers and their suppliers. Find out where your customers and their customers are located. You will likely find that somewhere in your supply chain there is someone who will be affected by Brexit and the effects will make their way to you.
Like I always say, pick your head up and take a good look at the world around you.  Just like the bullwhip analogy in a supply chain, one small ripple in the whip can cause huge results.

With Europe experiencing the worst refugee crisis since World War II, this splintering of the EU is going to shock their already frail economy. In addition, they will continue to grow unemployment rates (The Independent). The Treaty of Lisbon (originally created in 2007) created stronger immigration policies to regulate those immigrating from “third countries” or in other words, countries outside GB. This treaty also set the procedures for countries who decide to leave the EU.
Now that GB has voted to leave the EU, they will start to transition into a third country position. This can result in the British Parliament enacting immigration policies. Travel between GB and EU may not be as easy as once before.

With any political action that causes major uncertainty and doubt in the market, it’s reasonable to expect that investors are going to react. Most investors are willing to take calculated risks, but when the final vote for Brexit tallies at 51.9% Leave vs. 48.1% Stay, the market becomes a scary place.
The day after voting day on Brexit, the pound fell to the lowest value in 3 decades. Oil dropped on Friday as well. Almost a week later, the stock market is only slightly bouncing back.
With the financial implications of Brexit panning out, London’s title as a global financial hub is being threatened as many investment banks are considering moving their headquarters to Frankfurt or Paris. This will not only impact GB’s stock market, but increase unemployment. The Financial Times has already reported that some of the major US banks (JPMorgan Chase, Goldman Sachs, and Morgan Stanley) are moving their operations to other financial hubs within the EU.
We expect Foreign Direct Investment (FDI) to decrease as the GB renegotiates its relationship with the EU. Assuming that Britain comes out with favorable terms, we expect FDI to rebound and recover the loss during this time period.

(During these uncertain times, it’s critical that the CEO has a wingman. Download our How to be a Wingman Guide to learn how to be a trusted advisor your company needs.)

Out of the many financial implications of Brexit, trade is most likely going to be the most important macro issue companies need to address.
Let’s talk a little about tariffs on imports and exports. If you have a facility in the EU and need something from GB, then you’ll now have to accommodate tariffs within your selling price. EU tariffs on exports were cut about 50% since the 1990s. Great Britain is in a good position at this time with exports.

Going back to our conversation about labor, take a look at the manufacturing connections between GB and the EU. This division may result in higher manufacturing costs not only to cover new export/import tariffs, but costlier labor in GB as well.
Caterpillar, a heavy machinery company, owns a manufacturing facility in GB that employees over 9,000 employees. GB was a strategic location for them to optimize GB’s free trade relationship to the rest of the EU and their close proximity to customers in Europe, Africa, and Asia. What once was a competitive advantage is now in question. The Independent illustrates that this decision to approve Brexit has a ripple effect that will impact companies across the world.
Capital Economics contracted Woodford Investment Management to research the possible impacts that this separation of Britain from the EU would cause. They found that 63% of Great Britain’s exports are tied with EU members. While this most likely will not turn into anything more than an increase of tariffs, GB has 2 years under the Treaty of Lisbon to negotiate their withdrawal agreement. This is similar to a divorce followed by custody agreements.

There are no strong theories of how regulations might change. But it is important to be aware of changing regulations, especially when it comes to manufacturing facilities, imports, and exports. Expect security to strengthen in GB. As a result, it may result in new taxes or security measures to compensate.
Great Britain, as the 5th largest economy in the world, is not in a position where all of its innovation and brain power has disappeared with their split from the EU. GB may come to a stage where they will partner with the US and other countries to create a pool of innovation and ideas.

What impact does Brexit have on you?

As everything unfolds within the next two years, look at your projections. Understand that if you have any international connections, you may be facing financial implications.  Be sure to adjust them as needed while keeping an eye on the economy.  Now more than ever, solid future planning can be the difference between weathering the storm or getting swept away.

Just like during any period of uncertainty, it’s important to recognize the opportunities presented.  Take stock of your operations. See if there are things you can do to strengthen your business while everyone else is chasing their tails.  The uncertainty caused by Brexit is similar to that we discussed in the Trump Effect Part 1 and Part 2 and many of the same strategies can be employed to deal with or take advantage of it.

By addressing these 4 macro issues, you’ll be better prepared to reduce the impact of the unpredictability of big events. Some of these big events include presidential elections and the 5th largest economy leaving the only fully economically-integrated union in the world.
In any event, try to narrow possible areas of influence down to 4-5; then start drawing out all the consequences.  This will not only leave you feeling more prepared for the battle. But it will also reduce the stress the people in your company may be feeling.
After being in the financial sector for over 25 years, I’ve learned that stuff happens in the world and we always find a way to move on. Times are tricky and the future is murky, but fortunately, it’s not the end of the world. As the financial leader, it should be your priority to guide your company during this process of analyzing how economic decisions like Brexit will impact your business.  Acting in this way, you become your company’s wingman.
It’s vital for you as the financial leader to be the trusted advisor your company needs. If you’re uncertain about where to start, I’d like to offer you a free white paper on How to be a Wingman. 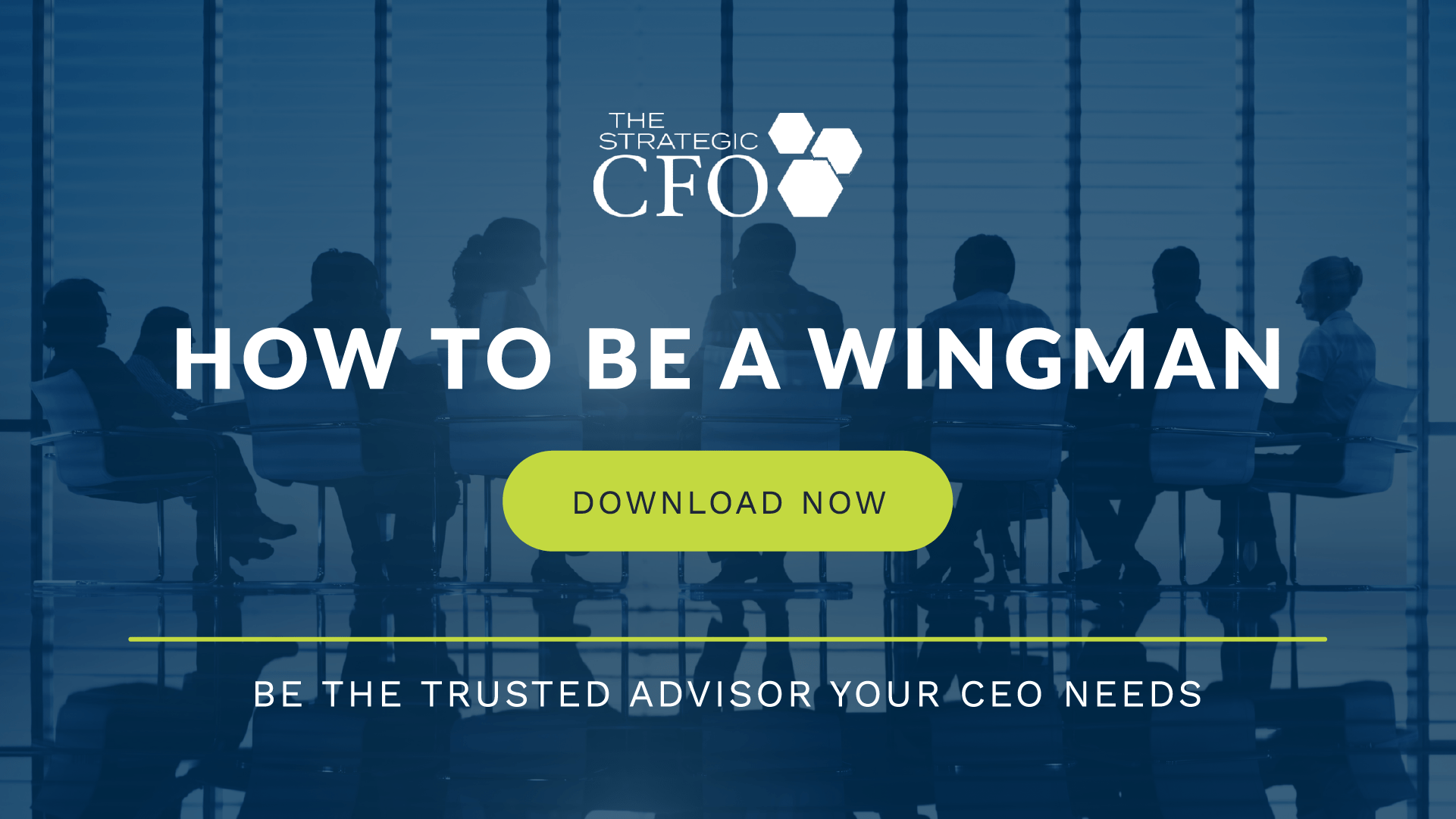 With all the drama caused by Brexit, we wanted to give you something to laugh about! Here are a few of our favorite jokes and memes that have come out of #Brexit. 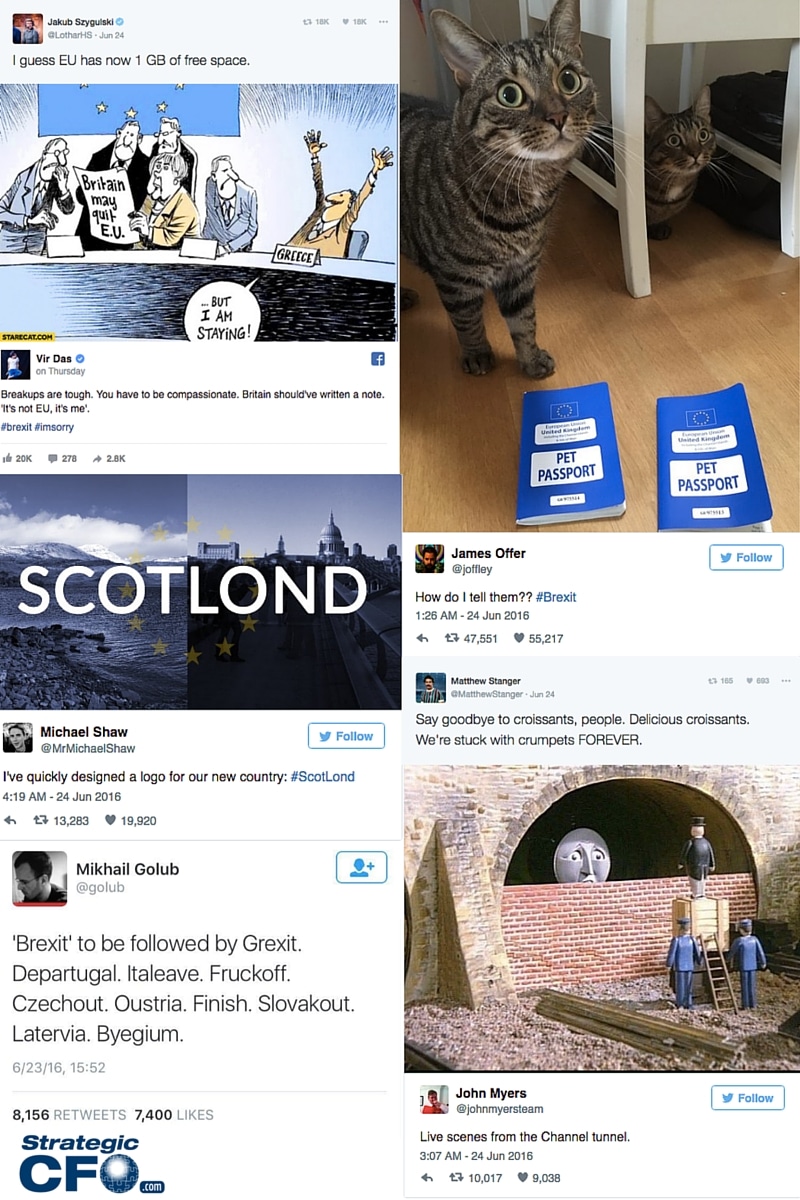