The biggest struggle in maintaining or improving profitability often comes down to pricing.  Two of the most common methods companies use to price their products are margin and markup.  Unfortunately, many people think they’re pricing their products based upon a desired margin, but they’re really using markup.  There is a major difference between the two methods and their impact on your bottom line. 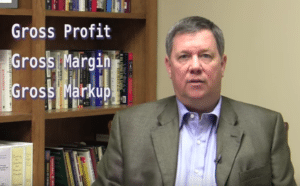 The Problem With Markup

Markup is commonly used to find the price of retail products which are somewhat of a commodity; costs are fixed and the market dictates purchasing price. Let’s explore what happens when you use markup as your primary reference for pricing.

Markup Percentage is the percentage difference between the actual cost and the selling price.

The retail markup percentage is 50%, because

How Using Markup Can Hurt Your Business in the Long Run

Markup is the difference between the actual cost and the selling price.  Since it is generally market-driven, it often fails to take into account a lot of the indirect costs associated with the product. Setting prices in terms of a particular markup can be dangerous unless the markup has been calculated in a way to consider all product costs – direct and indirect.

Are your sales suffering because of pricing issues?  Check out our Pricing for Profit Inspection Guide to improve your pricing strategies.

With our clients, we recommend using gross margin (or profit) percentage for a number of reasons. It is more reliable and accurate, and we can easily see the impact on the bottom line.

As mentioned before, gross margin is:

We then find the gross margin percentage, which is:

For example, Steve charges a 20% markup on all projects for his computer and software company which specializes in office setup. Steve has just taken a job with a company that wants to set up a large office space. The total cost needed to set up the space with computer and the respective software is $18,000. With a markup of 20% the selling price will be $21,600 (see how to calculate markup above). The margin percentage can be calculated as follows:

As you can see from the above example, a 20% markup will not yield a 20% margin.  Failing to understand the difference between the financial impact of using margin vs. markup to set prices can lead to serious financial consequences.  In the example above, if Steve were to assume his 20% markup would yield a 20% margin, his net income would actually be 3.3% less than expected. While a 3.3% difference in net income may not seem like much, to many low-profit-margin businesses it can mean the difference between solvency or bankruptcy.

Additionally, using margin to set your prices makes it easier to predict profitability.  Using markup, you cannot target the bottom line effectively because it does not include all the costs associated with making that product.

How to Minimize Margin vs Markup Mistakes

To sum things up,  markup percentage is the percentage difference between the actual cost and the selling price, while gross margin percentage is the percentage difference between the selling price and the profit. Markup is not as effective as gross margin when it comes to pricing your product.  Not only should you take into account how much it costs to acquire the product, but you also need to take into account the indirect costs associated with your product in order to ensure you’re selling your products at a price that will result in profit.

If you’re still uncertain about how to price your product or service to be profitable, download the free Pricing For Profit Inspection Guide. This ultimate guide allows you to easily discover whether you have a pricing problem and gives you steps to fix it. 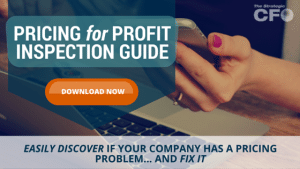 Access your Cash Flow Tuneup Execution Plan in SCFO Lab. This tool enables you to quantify the cash unlocked in your company.

Several years ago, I was consulting with a client in the staffing industry that was having a profitability problem:

We have happy customers and seem to be doing well, but we just aren’t making more money…

After visiting with the frustrated owner of the business, I visited various departments to understand the people and processes behind the numbers.

My first stop was at the operations department to learn about how the jobs were staffed.  I found out that on any given job, the company utilized both 1099 employees and W2 employees.  I asked them if they had the ability to track which type of employee worked on which job and they let me know that they could.

(Intuit offers a great visual aid on the difference between 1099 and W2 workers here).

Next, I met with the sales department to determine how they were setting prices.  I learned that they priced their services on a cost-plus basis using a markup of between 30% and 50%.

Their sales force also related to me that they were constantly being beaten up on price by their customers.

My last stop was to the accounting department to see what the financial statements could tell me about the company’s lackluster profitability.  Among other things, I found that overhead was running 20%-25%.

Based upon all of my investigating and conversations with the various departments within the company, I found several issues:

Additional costs were not reflected in price.

The type of employee that would be used on the job (1099 vs. W2) was not taken into account when the job was bid.  Consequently, the additional cost of the payroll taxes for using W2 employees was not being captured in the price.

Margin and markup were used interchangeably.

The sales department had assumed a 30%-50% markup was the same as a 30%-50% margin when setting prices.  Further, they did not understand the impact this confusion had on profitability.

(See Margin vs. Markup for further explanation of the difference).

The current pricing structure was not sufficient to cover the company’s overhead and still allow for a profit.

The answer seemed simple; the company had a pricing problem.

The wrinkle was that the sales force was already feeling great pressure to keep prices low in order to keep their customers, and didn’t have the confidence to approach them about a price increase.

My solution was to put together a communication tool for the sales force.  The tool was nothing more than a spreadsheet that broke out all the costs associated with delivering the service down to net income.

But its real value was in the confidence that it gave the sales people.  Not only did it allow them to understand what it would take to make a sale profitable, it gave them…

In a situation such as this one, it’s easy to default to the old & trusty fix: Reduce overhead. Cut costs.

But this is where the rubber meets the road in being a financial leader or CFO. The problem is so often more complex than large expense accounts on the P&L. You must interact with various departments, think critically and problem solve.

Identifying opportunities like those detailed above comes more naturally after years of experience, but these skills can also be acquired through training. Check out our Financial Leadership Workshop Series if you or someone in your company is eager to learn and develop.

Are you in the same boat as our client? Does it feel as though you should be making more money than you are? Download our Pricing for Profit Inspection Guide below.